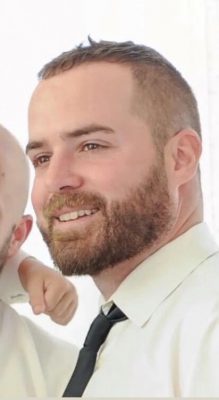 From beginning to end, our lives are made up of chapters through which we progress as we learn, navigate and evolve. In that way, Aaron’s story is no different.  In other ways, his story is so unique yet entirely relatable to many.

You may notice that the foundation’s logo includes an image of a wolf, a symbol of Creation, Death and Rebirth in Native American cultures. From a very young age, Aaron considered the wolf to be his spirit animal, as it represents the characteristics of loyalty, guardianship, reverence, and respect; all traits that were so integral to Aaron’s ethics and personality.  Therefore, there is no better way to tell his story than through the symbolism of his “spirit animal”.

First, Creation. Aaron Michael Cangey was born on March 18, 1987, and he would tell you that it was the coolest decade in which to be born. A native of New Castle, PA, or more specifically, a proud resident of Mahoningtown, Aaron grew up in a loud and loving Italian American family, attending Sunday dinners at his grandparents’ home.

From the beginning, Aaron was bright, charming, handsome, and charismatic. But most of all, he was compassionate, living his life in the service of others.  He had a lifelong, uncanny knack for creating mischief, and loved nothing more than making people laugh.

Aaron loved playing football, since he joined the team in middle school. He thrived with the teamwork, discipline, and camaraderie of the sport. Aaron gave his heart to practice, eventually playing defensive tackle for the New Castle High School football team. The single touchdown that he scored was on a fumble recovery, and as he crossed the goal line, adrenaline (and his natural humor) got the best of him and he did a front-flip into the endzone. Unsurprisingly this resulted in a penalty and a corresponding reprimand from his coaches. But to Aaron, it was a shining moment and he was going to make it count.

Aaron was a graduate of New Castle High School and Slippery Rock University, earning a B.S. in Criminal Justice. His outstanding academic performance earned him a full scholarship to Southwestern Law School in Los Angeles, California. After graduating from law school he moved back home to pursue a career in law in the hometown that he loved.

Like a wolf, Aaron was mysterious, bold and intuitive, and he never let anyone he knew or loved venture out alone into the darkness; he stayed by their side until their safety was assured.

Paradoxically, he often seemed to walk a tightrope of sorts in life – seeking adventure and defiantly relishing his individuality while simultaneously being caring, kind, charismatic and loving.

Aaron was loyal, noble, and devoted, unfailingly offering his help to anyone in need, be it friend, family, client or colleague. He truly was one of a kind; he knew how to blend in while at the same time managing to stand out. His personality was magnetic, and he had the ability to make just about anyone feel at ease.  People were people to him, no matter their background, social status or politics. He was known for occasionally exchanging his legal services for a pack of cigarettes; just because someone could not afford to pay him did not mean that they did not deserve to be represented. He had an enormous heart and a tireless work ethic.

Although Aaron lived a rich, full, and outwardly enviable existence, he had battled mental illness and alcohol addiction for the later part of his life, bringing in the second chapter of the wolf’s symbolism: Death. He struggled to find balance between his inner and outer worlds, and despite his best attempts was ultimately unable to do so and decided to end his life on October 9, 2018, smoldering one of the brightest flames this world had ever seen. However, he packed more into his 31 years than many do in a much longer lifetime, and for that, we are grateful.

Aaron knew the ins and outs of the legal system, due to both his professional-background and his first-hand experience. His unique understanding  lent him a unique perspective; he could truly and sincerely empathize with his clients, and they were able to sense and appreciate this. Aaron had a special compassion for clients who were going through drug court, often following up with them after graduation to ensure that they stayed the course. He regularly expressed ideas regarding potential improvements for the judicial system and drug court, always with the end goal of maximizing potential for success while maintaining human dignity.

The final chapter of his life, Rebirth, begins with this foundation. Like Aaron, millions of people struggle with mental health issues, often compounded by the added burden of addiction. Aaron was a tireless advocate for the underserved. As family members and friends of Aaron, it is our pleasure to continue his life and legacy through this initiative, by helping those who are lost in the dark find their spark again. Our goal is to provide assistance, guidance, and hope to select participants and graduates of treatment court so that they may gain the tools and empowerment to better their own lives.

The foundation’s logo was originally created by Aaron for his private law firm. He chose a wolf as his symbol not only because it’s his spirit animal but also for the wisdom it embodies. And also the fact his beloved dog, Django, is a Tamaskan; a Husky-Malamute mix that bears a striking resemblance to a wolf.

Get to know Aaron with some Fun Facts:

Favorite Childhood Book: “The Giving Tree” by Shel Silverstein and “Where The Wild Things Are” by Maurice Sendak

Favorite Song: “Dancing in the Dark” by Bruce Springsteen with “Thunder Road” being a close second

Favorite Movies: Jurassic Park, Braveheart, The Revenant, Die Hard, There Will Be Blood, No Country For Old Men, Loaded Weapon, Road to Perdition, Dumber and Dumber, Mad Max:Fury Road  – The list goes on…

Favorite Color: Red – because of Raphael, his favorite Ninja Turtle

Favorite Dessert: Anything chocolate and beignets ( He didn’t believe the hype until his girlfriend made him try one in New Orleans at Café du Monde. After that, they tried mastering the art of beignets making. They failed miserable, multiple times) 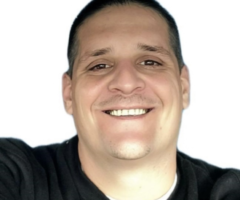 Donation Made In Loving Memory of Matthew Russick 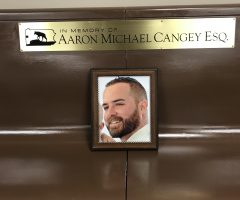